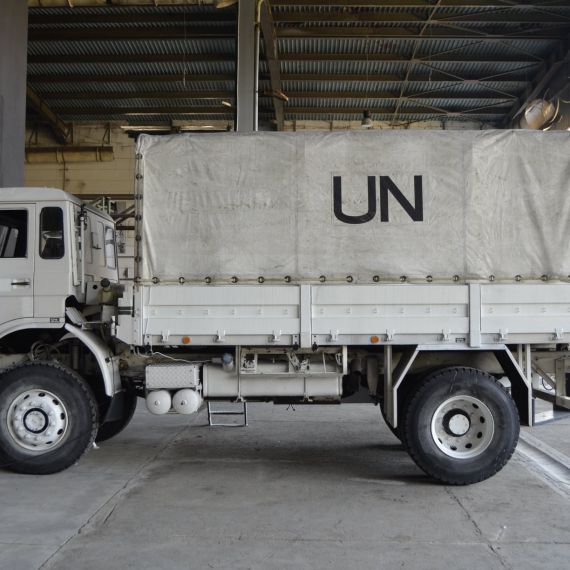 "Exodus," the opus of celebrated Bosnian painter Safet Zec, was opened for visitors at the Memorial Center on July 7th, 2020 for the occassion of the 25th anniversary of the Srebrenica gencide. The temporary exhibit was displayed for three months in the former battery factory in Potocari, where the people of Srebrenica sought refuge in July 1995.

An artistic testament to human tragedy and the futility of violence, "Exodus" is comprised of three distinct cycles: "Hands over Face," "Tears," and "Embraces." For more than 20 years, Safet Zec has been inscribing powerful emotions onto canvass, compelled by profound compassion for human suffering and horror at the extraordinary evil of which mankind is capable. Through these works, Zec conveys the outer limits of anguish, embodied in the violent destruction of love and life in Srebrenica.

"Što te nema?" is a nomadic monument by contemporary artist Aida Šehović, dedicated to the victims of the Srebrenica genocide. Inspired by the stories of Srebrenica's widows, the monument is comprised of 8,372 cups of freshly prepared Bosnian coffee.

In Bosnian culture, cups of coffee symbolize kinship--joyful gatherings of family and friends. A cup of coffee which remains untouched indicated the absence of an expected guest. Thus, the full cups of coffee in this exhibition represent the absence of the 8,372 victims of genocide, and the excrutiating longing felt by their surviving loved ones.

The participatory memorial is assembled in public spaces each year by volunteers and passers-by on July 11th. In 2020, on the occasion of the 25th anniversary of the genocide in Srebrenica, “Što te nema?” was erected in front of the Srebrenica Memorial Center with the help of volunteers from the Post-Conflict Research Center.

The model DAF YAD 4442 truck was used by the Dutch Battalion during their time in Srebrenica for the transportation of persons and supplies. More than half of the 80-truck fleet at the Battalion's disposal was housed in the former battery factory in Potočari when Bosnian Serb forces arrived in the enclave in July of 1995. Dutch soldiers used these trucks to transport Srebrenica's wounded, as well as to transport refugees fleeing Srebrenica to Potočari on July 11th.