The War in Bosnia and Herzegovina

The Socialist Republic of Bosnia and Herzegovina was the most religiously and ethnically diverse of all the constituent republics of the former Socialist Federal Republic of Yugoslavia (SFRY). According to the last pre-war census in 1991, it was comprised of roughly 43% Bosniaks (Bosnian Muslims), 31% Serbs and 17% Croats, with the remaining 8% identifying as either Yugoslavs or other minorities.

Following the disintegration of the SFRY in 1991, the Republic of Bosnia and Herzegovina held a referendum on independence in which 99% of voters who participated (representing 64% of the eligible population) voted in favor of independent statehood. Based on these results, Bosnia and Herzegovina declared its independence on March 1st, 1992. Although this move was soon recognized by the international community, it was staunchly opposed by the Bosnian Serb political establishment which had declared themselves an autonomous Serb region within BiH, later called Republika Srpska (RS).

The self-declared Serb Republic, led by their president Radovan Karadzic launched a brutal war agression against the soveriegn state of BiH with the support of the Milosevic regime in Serbia and the Yugoslav National Army (JNA). This campaign, which lasted from April 1992 until 1995, relied on the policies and tactics of ethnic cleansing to purge the territory of BiH of its Bosniak and Croat populations, in order to establish 'Greater Serbia.'

In April 1992, units of the JNA began shelling the Bosnian capital of Sarajevo and were soon joined in their attack by Bosnian Serb paramilitary forces. The violence quickly spread to eastern Bosnia, where Bosniaks living in small towns and villages such as Visegrade, Foca, and Zvornik, were forced to flee their homes under heavy fire. In less than two months, the RS captured roughly two-thirds of Bosnian territory through coordinated assaults by JNA units and the newly established Bosnian Serb Army (VRS) under the command of General Ratko Mladic.

The VRS continued its advance throughout 1992, unleashing particular devastation across eastern Bosnia. The hastily assembled and poorly equipped Army of the Republic of Bosnia and Herzegovina (ARBiH) managed to retain some positions along the frontlines, however their resistance was crippled by a pre-existing international arms embargo which solidified the Serb monopoly over the JNA weapons arsenal.

Apart from tipping the scales against the legitimate government of RBiH in this manner, the international community's involvement at the outset of the conflict remained minimal--mostly limited to mediations and delivery of international aid. Although the UN eschewed the possibility of military intervention, they did eventually deploy international protection forces (UNPROFOR) to a number of so-called UN 'safe areas.' These safe areas quickly became primary VRS targets, as the violence they inflicted against Bosnia's non-Serb population continued to escalate. Along with laying siege to Bosnian towns and cities (including the capital of Sarajevo), the RS was operating numerous concentration and rape camps across the country.

While internationally mediated peace talks had produced a number of proposals, the unwillingness of the RS leadership to relinguish any of their territorial gains doomed these negotiations to failure. With no end to the violence in sight, NATO leaders became gradually disposed to action. In its first-ever use of force, NATO fighters downed four VRS aircraft which were in violation of the UN no-fly zone in February 1994. More isolated airstrikes against VRS targets were carried out later that year at the request of the UN, however these attacks failed to bring an end to the conflict.

On the heels of the Srebrenica genocide and a series of VRS attacks on a Sarajevo market, more concentrated NATO airstrikes combined with ARBiH and Croat offences finally succeeded in bringing the RS to the negotiating table. Serbian President Slobodan Milosevic represented the Bosnian Serbs at the U.S. led peace negotiations held in Dayton, Ohio in November 1995.

The resultant Dayton Accords, formally signed by all three parties to the conflict that December, finally put an end to the war. After nearly four years of bloodletting which had resulted in well over 100,000 deaths, tens of thousands of rapes, and 2.2 milion displaced persons, peace had been achieved in Bosnia and Herzegovina at last. 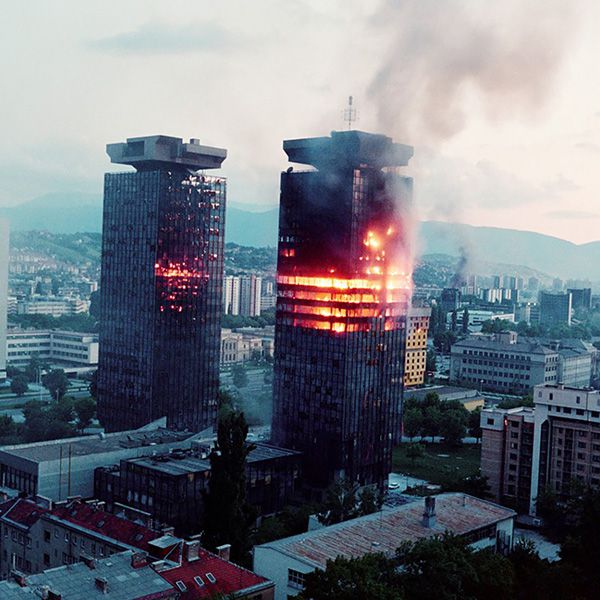