In August 1995, aerial photos showing recently dug mass graves alerted the world to the enormous cover-up operation which had been undertaken by Bosnian Serb forces in the immediate aftermath of the Srebrenica genocide.

In July of 1995, the VRS began transporting the bodies of Srebrenica's victims to primary gravesites in close proximity to the places where the victims had been executed, in order to hide the evidence of their crimes. The public discovery of these graves prompted an even more elaborate and sophisticated cover-up operation between August and November of that year, the likes of which have not be observed anywhere in the world.

During this period, the VRS employed civilian manpower and resources to exhume the remains of Srebrenica's victims from the primary graves and transport them to be reinterred at a number of secondary gravesites. In some instances, Bosnian Serbs exhumed these bodies a second time, and redistributed their remains among a network of tetriary gravesites even further removed from the places of execution.

This cover-up operation was initially undertaken in secret by engineering units of the Zvornik and Bratunac Brigades, operating under the direction of the Main Staff of the VRS. When the military infrasturcutre proved insufficient, VRS leaders recruited civilian manpower and resources for their criminal enterprise, including private sanitation companies from Zvornik and Bratunac. This operation was notable to only for its level of organization, but also for its sheer expansiveness. The exhumation, transportation, and reburial of bodies on such a massive scale required the work, resources and complicity of hundreds if not thousands of individuals.

The elaborateness of this undertaking greatly complicated the work of investigators later involved in the prosecution of the crimes committed in Srebrenica and the identification of victims. Nevertheless, years of painstaking effort on the part of international investigative bodies has allowed us not only to reconstruct the atrocities which unfolded in Srebrenica, but also to identify the remains of thousands of individuals.

To date, 94 mass gravesites have been exhumed in and around Srebrenica, and 6,900 victims have been positively identified. The search continues, however, for more than 1,700 victims who are still missing. 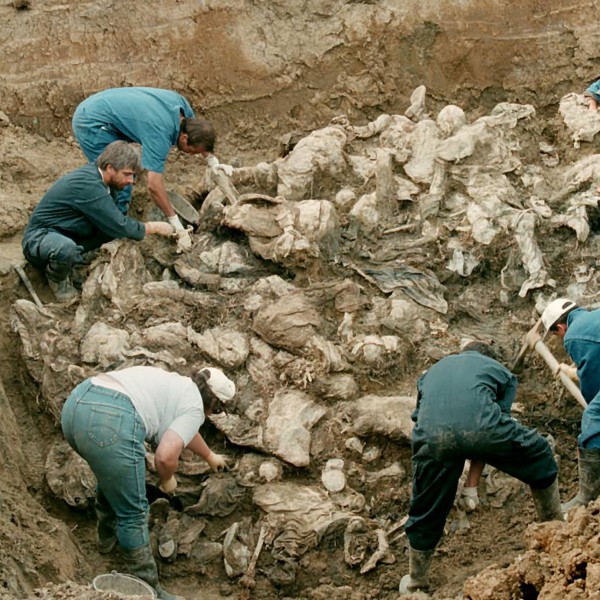