The 2022 Srebrenica Genocide Denial Report is based on monitoring and analysis of the instances of genocide denial between May 2021 and May 2022. The report utilizes quantitative methods for the collection of data available in the media. Following the content and narrative analysis of this data, the report offers recommendations for various actors and sectors of society to combat genocide denial.

The findings of the report suggest that denial of the Srebrenica genocide and glorification of war crimes and criminals remains ubiquitous in both Bosnia and Herzegovina and the region, and that the prevalence of these practices has in fact increased in comparison to the 2020-2021 reporting period.
Using quantitative analysis, 693 acts of genocide denial were identified in the public and media space in BiH and neighboring countries during this reporting period. According to the analysis, most of these instances occurred in the Republic of Serbia (476), followed by Bosnia and Herzegovina (176, of which 175 occurred in the entity of the Republika Srpska), and then Montenegro (27). Notably, two (2) instances of denial were also recorded in the Republic of Croatia. Denial of the Srebrenica genocide most commonly manifests in three forms: disputing the number and identity of the victims; international conspiracy theories and questioning the credibility of the courts; and triumphalism and nationalist historical revisionism. The majority of instances are active denials of the genocide, which include explicit claims that genocide was not committed; “alternative histories” and conspiracy theories that present completely fictitious explanations for the judicially established facts about genocide; attempts to silence or prevent fact-based public discussion of the genocide; counter-assertions of a genocide directed against the Serbian people and calls for its recognition; opposition to official documents adopted by states or institutions which recognize, condemn, or accept responsibility for the genocide; and opposition to the adoption of laws prohibiting genocide denial.
Genocide denial is also often inscribed in public space through graffiti and messaging, as well as the names of public institutions and streets. Dissenters are often the targets of violence and threats, both online and in person. The majority of deniers are political actors, including political parties and former and current party and public officials. After politics, the media is the next most frequent sector engaged in genocide denial, followed by individuals and institutions in the fields of cultural arts, science and education, and various forms of right-wing activism. After the adoption of the so-called “Inzko Law” (named after Valentin Inzko, the former High Representative in BiH) criminalizing denial, instances of genocide denial in Bosnia and Herzegovina sharply declined but was not reduced to zero. The Srebrenica genocide continues to be denied by high-ranking public officials, most notably BiH Presidency member Milorad Dodik. Denial remains explicit and public and is promulgated through official channels in BiH. Although the law has been in force for nearly a year, at the time of the writing of this report, not a single indictment has been filed for the denial of genocide.
With respect to last year’s report, the emergence of Israeli historian Gideon Greif among the top 10 deniers during the present reporting period has been a surprising development. Greif chaired the commission formed by the government of the Republika Srpska entity which recently published its report on the events which took place in Srebrenica during the war in the 1990s. The sole purpose of this report is, beyond a shadow of a doubt, to deny and relativize the genocide committed against Bosniaks in Srebrenica, and Greif himself has actively denied the genocide in the media. Following outrage in Bosnia and Herzegovina and around the world, particularly from Jewish communities and organizations, Greif attempted to retract his statements on the Srebrenica genocide in an effort to salvage his academic credibility. He did not succeed, however, and his name continues to be stained by his denial of the genocide in Srebrenica.
Open file here: Srebrenica Genocide Denial Report 2022 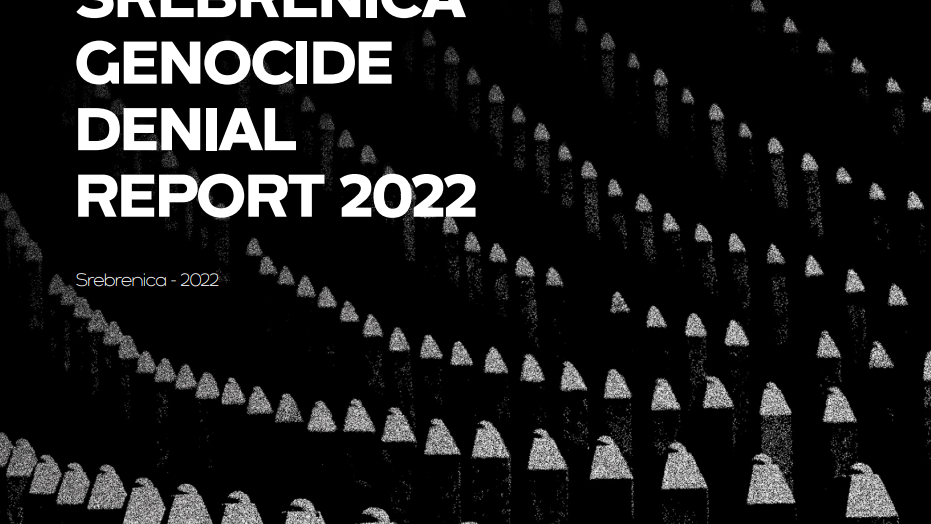 Personal Invitation to Volunteer in Transcribing/Translating

Your Help is Needed: Personal Invitation to Volunteer in Transcribing and Translating the Testimonies of Srebrenica Genocide Survivors

As a part of the „Beyond Words “oral history research project, the Srebrenica Memorial Center (SMC) supported volunteering program for young researche...

Menachem Z. Rosensaft to Attend This Year's Commemoration for Victims of the Srebrenica Genocide

Menachem Z. Rosensaft, Associate Executive Vice President of the World Jewish Congress, will be attending the commemoration for the victims of the Sre...

Statement by the Srebrenica Leadership Initiative

On Human Rights Day, an online conference was held in the organization of the Srebrenica Memorial Center called Human Rights of Survivors: Genocide De...